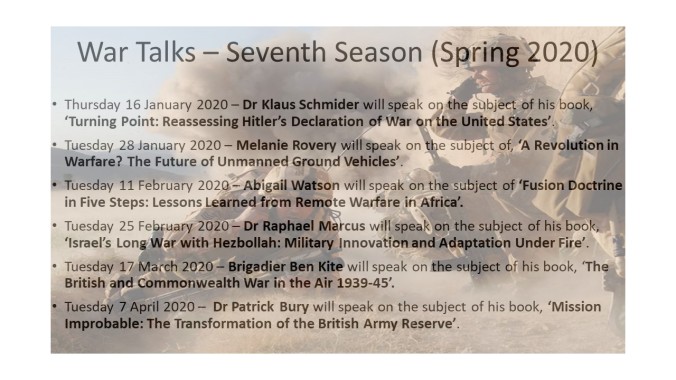 Although I’d rather be writing about something more conceptual, an important part of this blog is keeping you in touch with what is going on with the ‘War Talks’ Series and the British Army Military Book of the Year 2020. Our next Talk takes place this Tuesday, 11th February 2020 when Abigail Watson of the Oxford Research Group’s Remote Warfare Programme will speak at Prince Consort’s Library, Aldershot on the subject of ‘Fusion Doctrine in Five Steps: Lessons Learned from Remote Warfare in Africa‘. After that, however, the seventh season of the Series will face significant change.

Unfortunately, due to commitments in Israel, Dr Raphael Marcus has had to bring forward his trip to the United Kingdom and hence his ‘War Talk’. Dr Marcus’ Talk will now take place on Tuesday 25th February 2020, replacing the Talk by Brigadier Ben Kite which will now take place on Tuesday 17th March 2020. Timings and titles will remain the same. A benefit of the change has been that I have been able to organise an extra Talk on Monday 24th February 2020 at Army Headquarters in Andover. This additional Talk will be on the subject of ‘The Post-Soleimani Response from Iran and Hezbollah’ and will be recorded, as usual, for the Wavell Room and the ‘War Talks’ You Tube site.

It has also been necessary to postpone the Talk by Dr Ziya Meral until early in the Eighth Season. Unfortunately, Dr Meral is busy with work in the Middle East, however, I can now announce the title of his postponed Talk will be, ‘Turkey, Russia, and the Question of NATO’s Southern Flank‘. This Talk is currently pencilled in for Tuesday 12th May 2020 and will be the second Talk in the Eighth Season. The first Talk will be given by Colonel Chris MacGregor, Assistant Head of Army Communications and will be a fascinating exposition on the strategic importance of crypto-currency and why we ignore this development at our peril. I have also booked the brilliant young academic, Victoria Taylor, a rising-star in air power history, an Assistant Editor of ‘From Balloons to Drones’, and member of the Herstory Group to speak about her research into the Luftwaffe in the Second World War. Ms Taylor will speak in early July 2020.  The remainder of the Eighth Series is undecided, but it is hoped to reflect the books shortlisted for the British Army Military Book of the Year 2020 (#BAMBY20).

As some of you may have seen, the #BAMBY20 Long-List was published last week. The Long-List Committee was inundated with suggestions, receiving twenty-six nominations from serving soldiers, publishers, and veterans. After removing those ineligible, the field was reduced to twenty-three, and an afternoon of discussion and consideration at Prince Consort’s Library produced the published Long-List. The Long-List of thirteen books will be reduced to around six this month and announced on Friday 28th February 2020. The Long-List has received almost universal praise and I hope that trend continues, there is perhaps a lack of diversity in the nominees, but this is perhaps rather more reflective of the publishing market, particularly in these days of significant anniversaries, than of talent. It is only two years since Dr Aimee Fox won the prize, I am sure she will be joined by another woman writer in the not too distant future. Keep an eye open on the British Army website for the Short-List!!

In addition to the changes above, ‘War Talks’ will be exploiting its relationship with RUSI, The Wavell Room, and the British Army to reach 65 Talks by it’s third anniversary in July 2020. In addition to our intimate audiences at Prince Consort’s Library, we have a social media presence measured in the thousands, and a growing digital audience both as podcasts and You Tube videos. Wavell Room has a new volunteer digital editor and this should lead to faster publication of podcasts, while some investment in microphones and camera mounts should guarantee better quality video for You Tube. In terms of the Talks themselves, next week we hope to see a decision to begin a separate series in the North, spreading the word about informal professional military education. This move has taken too long, I apologise for its tardiness, but would remind you, Dear Reader, that the Talks and, to a lesser degree the BAMBY are a one-man band. I will return with further, more conceptual blogs in due course.

Have a great weekend,

One thought on “War Talks and BAMBY20 Updated.”