Evening all!  Since Armistice Sunday, I’ve busied myself with the final details of the Fourth Season of War Talks.  The new seasons Talks will, in the main, take place at the Aldershot Military Museum, although we will be returning to Prince Consort’s Library, Aldershot (PCL) for the presentation of the British Army Military Book of the Year Prize 2018 (BAMBY18) on Wednesday 20th February 2019, and if requested by the Army Library Information Service.  We intend to continue our ‘On the Road‘ initiative in 2019 with Talks in Portsmouth, Tonbridge, London, Colchester, and even into the High North beyond Watford Gap.  It is unlikely we will be called upon to run BAMBY19, as the staff at PCL now have sufficient spare capacity to do the task themselves, although we stand ready if called upon to assist.  I have to thank Kirsty Hoyle and her staff at the Museum for their help in 2018, we run the programme without a budget and so I am indebted to the speakers, museum staff, and my employing officers for giving me the time and support to carry on the important work of the War Talks initiative.

In 2019, thanks to the generosity of the Director General of the Royal United Services Institute for Defence and Security Studies (RUSI), Karin von Hippel, we will be entering into an informal collaboration with the World’s oldest Think Tank.  The collaboration will allow us to access RUSI’s excellent Researchers and Fellows at no cost, and to engage with schools and colleges in West Surrey and North Hampshire in the afternoons before the evening War Talks.  I’m really excited by this development, which will help RUSI with outreach, the War Talks with speakers, and the students of the area with their wider education.

So on to the Talks in detail: Our first speaker, just before Christmas (Tuesday 18th December 2018) , will be First World War expert Taff Gillingham.  Taff is perhaps Britain’s foremost expert on the British Tommy and has been the military advisor on many film and television productions including Journey’s End (2017) and Downton Abbey (2011). Taff will speak on the subject of the Christmas Truces, dispelling the myths, and filling in the gaps in the story of the iconic truces of 1914 and 1915.  Our first Talk (Tuesday 8th January 2019) in the New Year will be by our first RUSI academic; Emily Ferris is RUSI’s Research Fellow for Russia and Eurasia, she has written extensively on the subject of Russia and will speak on Russia’s relations with the West and future prospects for that relationship.  Next, we have the author James Barr; James, a Visiting Fellow at King’s College, London, will speak (Tuesday 22nd January 2019) on the subject of his latest book, ‘Lords of the Desert: Britain’s Struggle with America to Dominate the Middle East‘, an examination of British foreign policy in the Middle East following the First World War.

We have two Talks in February.  Our first (Thursday 7th February 2019), will see Dr Mike Martin, an academic and Reservist, speak about his book, ‘Why We Fight‘, a compelling look at the evolutionary psychology of violence and warfare.  Then, on Wednesday 20th February 2019, we will host the prizegiving of the BAMBY18, and the winner, Dr Aimee Fox, will speak on the subject of her book, ‘Learning to Fight‘.  In March 2019, we will have Talks by Prof Peter Doyle (Thursday 7th March 2019) and Veerle Nouwens (Tuesday 19th March 2019).  Peter is a prolific author and historian and will speak on the subject of his book, ‘Disputed Earth: Geology and Trench Warfare on the Western Front 1914-18‘ while Veerle is RUSI’s Asia-Pacific Research Fellow and a much published academic, who and will speak about China and its much misunderstood foreign and defence policies.  In April 2019, we have Talks by two more RUSI Research Fellows, Dr Jack Watling (Tuesday 9th April 2019)and Alexandra Stickings (Tuesday 16th April 2019).  Jack, an academic and journalist, has carried out investigations in the trouble spots of the Middle East and is an acknowledged expert on Iran and its foreign policy, while Alexandra is RUSI’s Space Fellow and an acknowledged expert in her field.

These Talks will take us up to Talk number 35 and see the initiative mature into an enduring part of the professional military education scene in and around Aldershot.  I look forward to seeing you all at either the Talks or the School events. 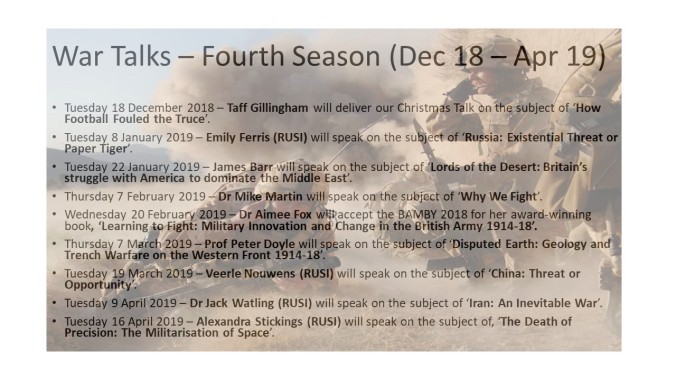 All the very best,