I concluded Part One of this Blog at the Australian Memorial at Villers-Bretonneux.  Over the preceding day and a half, our multinational group had visited sites associated with the Battle of the Somme 1916, the Michael Offensive of the Spring 1918, the Battle of Amiens 1918, and the subsequent 100 Days’ Offensive.  In doing so, we had dispelled many myths about the Western Front: discussed the adaptive nature of tactics on both sides, the effects of innovative technology, and the nature of command on a modern battlefield.  Throughout the Tour, remembrance and memorialisation had never been far away, whether at Lutyens’ gargantuan masterpieces at Thiepval and Villers-Bretonneux, or in the more intimate cemeteries and memorials in Beaumont Hamel and Moreuil Wood, we now headed off to pay our respects at the British Government’s Amiens 100 commemoration. 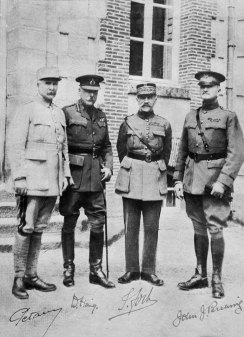 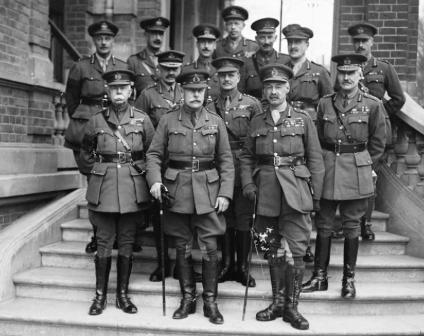 The centenary commemoration was held in the magnificent Cathedral in the mediaeval heart of Amiens.  Our children, whether in their cadet uniforms or the distinctive red tour tee-shirts, were a credit to their schools, cadet organisations, and countries.  The inside of the eleventh century cathedral was thankfully cool with much to see as we awaited the arrival of VVIP guests, some of whom we had been lucky enough to meet at the Reception on the previous evening.  Other than HRH the Duke of Cambridge’s mispronunciation of ‘Foch’, the ceremony was a flawless act of remembrance as well as a re-statement of the sentiments of the Entente Cordiale.  After the VVIP guests had departed, I took a wander around the thirteenth century Cathedral described by Richard Hannay, the fictional hero of John Buchan’s Thirty-Nine Steps, as ‘the noblest church that the hand of man ever built only for God’. I saw some curious sights as I strolled around but I’m unsure whether I was more astounded by the reliquary purported to hold the skull of John the Baptist, or the sight of American soldiers having their photographs taken whilst seated in the seat recently vacated by the Royal Duke.

The evening was spent in the convivial company of the other Battlefield Guide, Mr Allan Wood, and Sir Hew Strachan.  To say that I was fascinated by Sir Hew’s pearls of wisdom would be an understatement, I happily sat at the feet of the master and went to bed with my head swimming with First World War history and rather too much Biere de Picardie! The next morning, after Sir Hew had regaled us with his incisive analysis of the Armistice and Treaty of Versailles, we drove south to Compiegne and the Glade of the Armistice where the eponymous ceasefire was signed on 11th November 1918.  It was a curious experience visiting the place where the War ended, it was easy to empathise with both Foch and the Allies who wanted to ensure the War could not restart, and the Germans for whom so much in blood and treasure had been lost for what was an ignominious surrender.  It was interesting to consider the Germans’ feelings in June 1940 when they were able to overturn the Armistice and, on the orders of Hitler, leave the statue of Foch to look down on the devastated Glade.  In a final act of remembrance, a representative from each country laid a wreath at the ‘Ring of Peace’, a large steel ring engraved with the word ‘Peace’ in multiple languages sitting upright on the edge of the Glade.

The party broke up at Compiegne and headed back to homes as widely dispersed as California and Tasmania.  On the Ferry on the way back I was privileged to do a podcast with Sir Hew Strachan on the Battle of Le Hamel, I hope to hear it published shortly.  There has been much debate on both social and mainstream media as to the efficacy of the last four years’ centenary commemorations.  In my case, I am immeasurably better informed about the Great War than I was on that August evening four years ago when I placed a burning candle in my window at RAF Brize Norton Sergeants’ Mess.  I’d like to think that the thousands of students and teachers who have visited the battlefields with Simon Bendry’s programme have also moved substantially away from the mud, blood, and endless poetry.  I accept that there has been a plethora of ahistorical rubbish created to commemorate the centenary, but even this has increased interest in the War; I must say that, on balance, I believe the nation is better informed today than it was in 2014.  We have moved away from Blackadder Goes Forth, often with thanks to Blackadder Goes Forth.  It is the destination which matters rather than the routes taken to get there.

Have a lovely week, 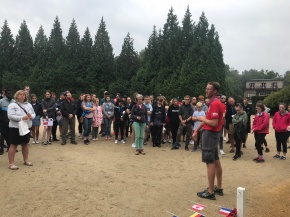